Beatlemania Again! at Mainstage Center for the Arts

It was one of the greatest moments in the history of show business. It was 1:20 PM, on February 7th, 1964, when Pan Am Yankee Clipper Flight number 101 carrying four British musicians landed at New York Idlewild Airport. Within 48 hours the Beatles were performing on the Ed Sullivan Show capturing 73 million viewers. 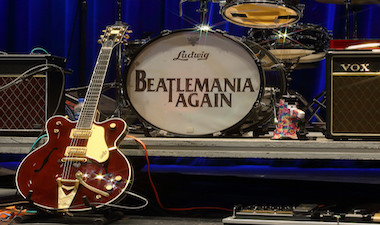 Now in 2019, BEATLEMANIA AGAIN, relives the music, the magic and the mania of The Beatles live on stage. The show chronologically traces The Beatles career from their debut on the Ed Sullivan Show in 1964 to their psychedelic era and the release of the mind-blowing “Sgt. Pepper” album, to their last -ever live concert on the rooftop of Apple records in 1969.

BEATLEMANIA AGAIN takes audiences on a musical journey back in time featuring over 30 of The Beatles greatest hits performed live on stage. In addition, the show features 3 amazing costume changes throughout the performance as well. To add to the authenticity, BEATLEMANIA AGAIN uses the same musical instruments that the Beatles used in the 1960’s such as Hofner Bass Guitars, Rickenbacker Guitars, Gretsch Guitars, Vox Amplifiers, and Black Oyster Pearl Ludwig Drums.

The show has excited audiences throughout the United States and Canada, and has shared the stage with highly talented artists such as BJ Thomas, The Grass Roots, The Lovin Spoonful, Chubby Checker and many more! The universal appeal of The Beatles music makes the BEATLEMANIA AGAIN show the perfect entertainment choice for any event.

Travel back to the 60s when The Beatles took the world by storm and created a craze across the nation with Beatlemania Again. This live stage show takes audiences on a musical journey through three eras of The Beatles’ remarkable career, at 7:00 p.m., Saturday, Feb. 16, in the Dennis Flyer Theater in Blackwood. Beatlemania Again is presented by Mainstage Center for the Arts.

The show begins with “Meet the Beatles” as the group arrives in America for their 1964 debut on the Ed Sullivan Show. The production captures the energy and excitement of The Beatles live performances with the original sounds of the albums.

Next, the performance transforms into “Sgt Pepper.” The Sgt. Pepper’s Lonely Hearts Club Band album, released in 1967, is widely regarded as one of the most influential recordings of all time. It spent 27 weeks at the top of the albums chart in the UK. Beatlemania Again performs its songs with no sequencing, backing tracks or offstage musicians.

Then, the closing act, “Get Back,” features hits from The Beatles’ final albums, Abbey Road and Let It Be. Performing hits from 1968 to 1970, Beatlemania Again brings to the stage the charisma and emotion that was hidden behind the walls of Apple and Abbey Road studios.

“We are very excited to be returning to the Dennis Flyer Theatre at Camden County College for the third year in a row. We had a great crowd out last year, singing along to every song. We enjoyed meeting the audience after the show and seeing familiar faces, “ said Rich Morello, Ringo of Beatlemania Again. “Mainstage does an amazing job keeping the arts alive in South Jersey, and we are proud to be a part of it.”

Audience member Jean Cordasco said, “Beatlemania Again is such a fun show and a great sing-along to all the group’s wonderful hits. We went with friends last year who are admittedly Beatles fanatics. A very enjoyable time.”