Calling all 18+ actors! Mainstage Center for the Arts is now casting for The Lightning Thief: The Percy Jackson Musical, with music and lyrics by Rob Rokicki and a book by Joe Tracz, based on the 2005 novel by Rick Riordan. The show follows Percy Jackson, a teenager who discovers that he is a demigod and goes on an epic quest to find Zeus' missing lightning bolt and prevent a war between the Greek Gods.

Actors should prepare a 16-32 bar cut in a similar style of the show. There will not be an accompanist, however there will be a stereo and aux cord provided. Please bring your own music.

Please bring a headshot, resume, and fill out the audition form linked below. To secure an audition slot, sign up using the link below. Walk-ins appreciated!

If you can't make auditions or have any questions, email julie@mainstage.org

Mainstage is committed to an inclusive environment. We encourage performers of all ethnicities, gender identities, and abilities over the age of 18 to audition.

PERCY JACKSON: Son of the sea god, Poseidon. Percy is a good kid with ADHD and dyslexia, who can’t seem to stop getting into trouble, and just wants to find a place where he can belong. That opportunity comes from the most unexpected place when Percy is given a quest from the gods to find and return Zeus’ lightning bolt, save his mom from the Underworld, and prevent a war between the gods.

ANNABETH CHASE: The daughter of Athena. Smart, feisty, and eager to prove herself to her mom, Annabeth is skeptical of Percy at first, but becomes one of his best friends through the trials they face on Percy’s quest.

LUKE CASTELLAN: Son of Hermes and one of Percy’s first friends at camp. He helps Percy come to terms with finding out that he’s a demigod and provides advice when the gods give Percy his quest.

BRUNNER/CHIRON: Percy’s kind, but stern, Latin teacher. He expects the best out of his students, especially Percy. Also happens to be a centaur.

CLARISSE LA RUE: The daughter of Ares. Competitive and tough-as-nails, she’s known for her prickly demeanor and battle skills in capture the flag.

GROVER UNDERWOOD: Percy’s best friend. Unbeknownst to Percy before he goes to Camp HalfBlood, Grover is also a satyr—a child of Pan and protector of demigods.

SALLY JACKSON: Percy’s hard-working mom. Sally’s raised Percy on her own, and would do anything to protect her son.

D: Also known as Dionysus, the god of theater and wine, and the grouchy director of Camp Half-Blood.

HADES: Poseidon’s brother, the god of the Underworld.

ARES: The god of war.

CHARON: The ferryman to the Underworld.

KRONOS: Father of the Olympians, his children trapped him in Tartarus after losing against them in a war. 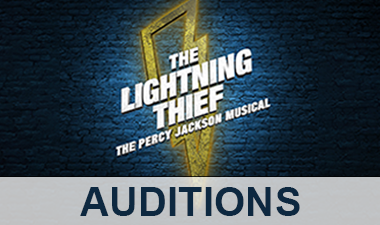 As the half-blood son of a Greek god, Percy Jackson has newly-discovered powers he can’t control, a destiny he doesn’t want, and a mythology textbook’s worth of monsters on his trail. When Zeus’s master lightning bolt is stolen and Percy becomes the prime suspect, he has to find and return the bolt to prove his innocence and prevent a war between the gods. But to succeed on his quest, Percy will have to do more than catch the thief. He must travel to the Underworld and back; solve the riddle of the Oracle, which warns him of betrayal by a friend; and come to terms with the father who abandoned him. Adapted from the best-selling book The Lightning Thief by Rick Riordan and featuring a thrilling original rock score, The Lightning Thief: The Percy Jackson Musical is an action-packed mythical adventure “worthy of the gods” (Time Out New York).

In 2014, The Lightning Thief debuted as a one-hour musical at the Lucille Lortel Theatre off-Broadway. After a national tour, an expanded version of the show returned to the Lucille Lortel Theatre in 2017. The show toured again, and on October 16, 2019, The Lightning Thief opened on Broadway at the Longacre Theatre, featuring Chris McCarrell as Percy Jackson.