From the creative team at Mainstage Center for the Arts  that brought you
Little Shop of Horrors, Legally Blonde, and Chicago !

Join us for our Summer 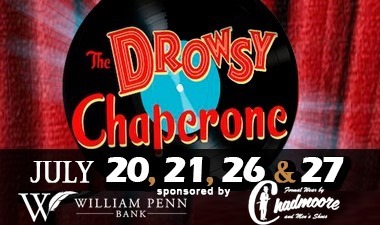 Mayhem, mix-ups and a gay (in the old sense of the word) wedding mark the high-spirited hijinx of The Drowsy Chaperone, winner of five 2006 Tony Awards. The fun begins when a die-hard musical fan plays his favorite cast album, a 1928 smash hit called “The Drowsy Chaperone” and the show magically bursts to life. Suddenly the man finds himself immersed in the glamorous, hilarious tale of a celebrity bride and her uproarious wedding day, complete with thrills and surprises that take both the cast (literally) and the audience (metaphorically) soaring to the rafters.

"This unique musical is an ode to those old 1920’s musicals that were light on plot and heavy on comedy, with rousing music with catchy rhythms and loads of up-tempo dances and several “take-home” songs you’ll be humming for a while. The Drowsy Chaperone is long on exuberance and showstoppers. It is a musical-inside-a comedy."

When a die-hard theatre fan plays his favorite cast album, the characters come to life in this hilarious musical farce.

Winner of five Tony Awards, including Best Book and Best Original Score, The Drowsy Chaperone is a loving send-up of the Jazz Age musical, featuring one show-stopping song and dance number after another.

With the house lights down, a man in a chair appears on stage and puts on his favorite record: the cast recording of a fictitious 1928 musical. The recording comes to life and The Drowsy Chaperone begins as the man in the chair looks on. Mix in two lovers on the eve of their wedding, a bumbling best man, a desperate theatre producer, a not-so-bright hostess, two gangsters posing as pastry chefs, a misguided Don Juan and an intoxicated chaperone, and you have the ingredients for an evening of madcap delight.