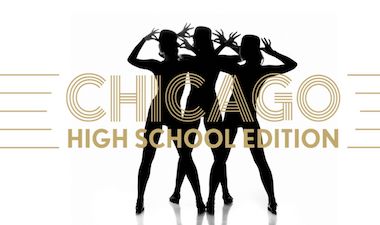 In roaring twenties Chicago, chorine Roxie Hart murders a faithless lover and convinces her hapless husband, Amos, to take the rap...until he finds out he's been duped and turns on Roxie. Convicted and sent to death row, Roxie and another "Merry Murderess," Velma Kelly, vie for the spotlight and the headlines, ultimately joining forces in search of the "American Dream": fame, fortune, and acquittal.

Changes made to the High School Edition - Removal of adult language and overly sexual references.

Thank you for your order! You will receive a confirmation via e-mail shortly.

If you have any questions regarding your order, please contact Mainstage Center for the Arts at 856-227-3091 or info@mainstage.org. Please reference the order number listed below in all correspondence.

Please Note that unless stated otherwise. ALL PERFORMANCES are held at:

No Refund on Ticket Purchases

Chicago: High School Edition has music by John Kander, lyrics by Fred Ebb, and book by Ebb and Bob Fosse. The musical is based off a 1926 play of the same name written by Maurine Dallas Watkins, a reporter who wrote about actual criminals and crimes she reported.

When the original play was written, Watkins was covering the trials for accused murderers Beulah Annan and Belva Gaertner for the Chicago Tribune. At the time, the Chicago public was enamored with the subject of homicides committed by women. Many high-profile cases arose that involved women murdering their husbands. With these cases, people developed the theory that attractive women could not be convicted by a jury of men. Thus, the story of Chicagowas born.

Watkin’s play ran on Broadway in 1926 for 172 performances and was later developed into two movies: a silent film titled Chicago in 1927 and Roxie Hart in 1942 starring Ginger Rogers. Fosse approached Watkins in the 1960s to make it into a musical but Watkins, a born-again Christian, did not want her play glamorizing a scandalous way of living to be adapted.

Fosse, Vernon, and Fryer finally began working on the Chicago musical adaption after Watkins died in 1969 and her estate sold them the rights.

Like the play, the musical is a satire piece about corruption in the in the administration of criminal justice and the idea of a “celebrity criminal.” America has had its share of “celebrity criminals” over the years, including Bonnie and Clyde, Billy the Kid, and Al Capone.

Fans of Chicago should not fret over the “high school” label. The themes and story of the show remain the same. This version of the show simply removes the adult language, overly sexual references, and the songs “Class” and “A Bit of Good.”. These changes make the show accessible to wider audiences and allow teens the experience of performing in Chicago.