These 3 Masters, featured regularly at the renowned “Slack Key Show®” on Maui, bring Hawai‘i’s unique folk styles, with origins in the early 19th century Hawaiian paniolo (cowboy) culture, to 21st century stages. They themselves grew up in areas so rural, without electricity, radio, or TV, that they were immersed in Hawaiian music and culture from childhood.

A master of the slack key guitar and National Heritage Fellow, LEDWARD KAAPANA has been one of Hawaii's most influential musicians for four decades. His mastery of stringed instruments, his exceptional picking style on slack key guitar and ‘ukulele, and his extraordinary baritone to leo ki`eki`e (falsetto) vocal range, have made him a musical legend and earned him multiple Na Hōkū Awards. 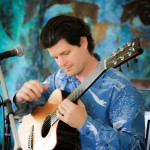 Recognized as one of Hawaii’s most versatile musicians, JEFF PETERSON is at the heart of the Hawaiian music scene today. His passion for the guitar has allowed him to shine as a solo artist and has given him the opportunity to collaborate with a wide variety of artists from Hawaii, across the US, and abroad. His focus on Slack Key guitar, classical, and jazz music has allowed him to develop a unique and transcendent voice on the guitar while being deeply rooted in the traditions of his Hawaiian heritage.He has contributed to two Grammy Award-winning recordings and has been honored with four Na Hōkū Hanohano Awards in Hawaii. 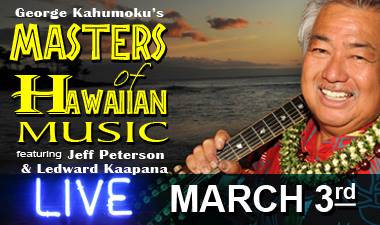