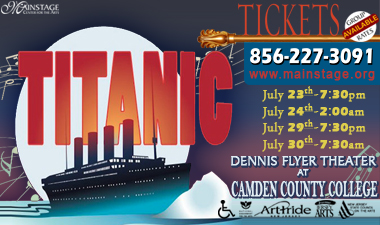 AUDITION WORKSHOP
May 17th 7:00 - 8:30
This is open to all those who would like to run through the audition selections with the vocal musical director in preparation for auditions.

AUDITION DETAILS
1. All those entering 8th grade through adults are welcome to audition.
2. All those auditioning must sing one of the selections provided.  Please see audition material links below.
3. Please come to auditions with completed audition form and conflict schedule.
4. There is a $50. Activity Fee associated with this program that should be paid at the first rehearsal. Checks can be made payable to Mainstage Center for the Arts.

CONFLICT CALENDAR
Please review this rehearsal calendar and list any conflicts you have on your audition form.   A specific weekly calendar will be posted on Friday of each week.  Only those called for on any given date will need to attend.
Titanic Calender-1

VOCAL AUDITION SELECTIONS
The Vocal Music Director, Mr. Robert Joubert, will go through all of these selections on May 17th at Academy Hall during the vocal music workshop.  He strongly encourages candidate to prepare a specific audition selection and become familiar with all gender accurate selections in the event you are asked to sing something else for call backs.

Female Roles - I Have Danced

Male Roles - To Be a Captain

CAST LIST
Below are all of the roles that will need to be filled.  Doubling and tripling is possible.
The directors are also looking for two boys in the 10 year old range to fill one child's role. 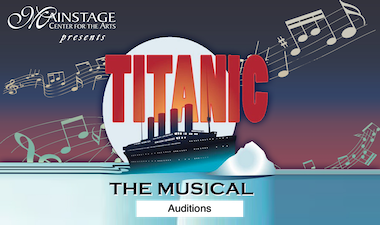