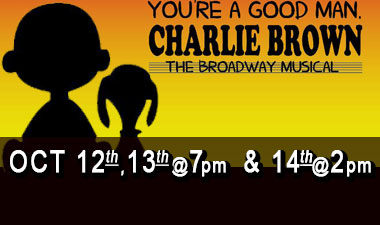 YOU'RE A GOOD MAN, CHARLIE BROWN (REVISED) opened on Broadway in 1999. It is a fresh approach to the all-time 1967 classic. Sally Brown joins Charlie Brown, Linus, Lucy, Schroeder, and Snoopy in this version. Two new songs, Beethoven Day and My New Philosophy, have been added to the twelve wonderful numbers of the original version, such as My Blanket and Me, The Kite, The Baseball Game, Little Known Facts, Suppertime and Happiness.

Thank you for your order! You will receive a confirmation via e-mail shortly.

If you have any questions regarding your order, please contact Mainstage Center for the Arts at 856-227-3091 or info@mainstage.org. Please reference the order number listed below in all correspondence.

Please Note that unless stated otherwise. ALL PERFORMANCES are held at:

No Refund on Ticket Purchases

“Happiness is two kinds of ice cream, sharing a secret …” or spending a couple hours with Charlie Brown, Snoopy, and friends as Mainstage Center for the Arts (MCA) presents You’re a Good
Man, Charlie Brown, a musical for all ages, October 12 -14 at Dennis Flyer Theater, Camden County College, Blackwood.

This award-winning Broadway revival version brings Charles Schultz’s beloved characters to life. It follows one full day in the lives of Charlie Brown (John Koza of Mantua) and the “Peanuts” gang capturing classic moments such as Schroeder (Frank Testa of Blackwood) at the piano, Linus (Christian DeCola of Maple Shade) with his blanket, Lucy (Nicole Duffy of Williamstown) as a psychiatrist, Sally (Kaylee Corrato) frustrated with her teacher; and Snoopy (Brielle Hina of Sewell) waiting eagerly for supper.

Of portraying everyone’s favorite blockhead, Koza said, “I’m having a lot of fun playing Charlie Brown and am enjoying acting out his mixed emotions. I love how he’s happy one minute and then depressed the next.”

Charlie Brown’s loyal companion Snoopy is also a multifaceted character explained Hina, “One challenging part about playing Snoopy is that although he is a silly character, he also takes himself seriously. So for example, while he’s sitting on his dog house yelling about the Red Baron, which to the audience is a very comedic moment, to Snoopy it is very important and serious. I have to find a way to show how Snoopy takes himself seriously while still being that comedic character everyone loves.”

The production features 14 upbeat songs including “My New Philosophy,” “The Baseball Game,” “Suppertime,” and the well-known “Happiness.”

Director Stephanie Filippo said, “The line ‘Happiness is coming home again’ in the song Happiness is especially meaningful for me. Mainstage and Summer Stage was my home growing up and where I made some of my closest friends. It’s fitting to be directing a show about friendship at Mainstage.”