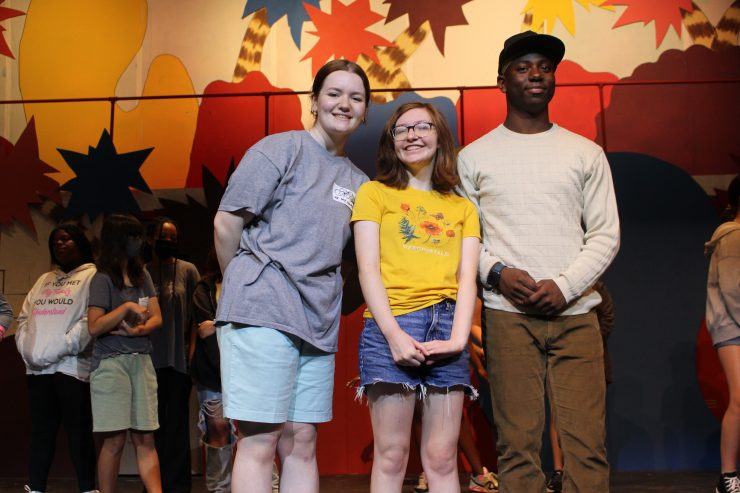 Seussical, Jr. delights audiences of all ages with its nostalgic cast of characters including Horton the Elephant (Michael Thompson), Cat in the Hat (Charlotte Capie), JoJo (Riley Cassidy), Gertrude McFuzz (Kira Fisher), and Mayzie La Bird (Tatianna Stewart). The mischievous Cat in the Hat narrates, leading the audience on a roller-coaster ride of adventure, weaving story lines and characters together in exciting and unexpected ways. This madcap character disappears and reappears at various parts in the production.

“It’s interesting how the Cat is both a narrator and character within the show. My favorite part about the role is the amount of energy required to play the character and how the Cat is all over the place.” Capie said.

Thrown into the Cat's adventures is JoJo, a young girl who is transported to the Jungle of Nool, where the story begins with the tale of Horton Hears a Who. The lovable Horton the Elephant tries his best to save Whoville and the small Whos including JoJo, and her parents, Mr. and Mrs. Mayor (Uzziah Davis and Sydney Fiala). The Sour Kangaroo (Leila Clark), her Baby Kangaroo (Kate Lewis), the evil Wickershams, and others gang up against Horton.

“My favorite part is how fun JoJo is and how different the role is from previous ones that I have played before. I think it is cool how JoJo controls the world of Seuss with just her imagination,” said Cassidy.

The Cat in the Hat says, "Get your tickets today and don't delay." Online ticket prices: $16 adults, $13 senior citizens/children 18 and under. To purchase tickets, visit www.mainstage.org

​​In addition to Seussical, Jr. being sponsored by the Bank of Princeton, the Lampost Diner, and the Meadows Diner, the Summer Stage season is sponsored by the New Jersey State Council on the Arts, Horizon Foundation for New Jersey, A. P. Construction, OceanFirst Foundation and Comegno Law Group.